Saudi Arabia’s victory and Iran’s defeat… How did the World Cup “embarrass” the Houthi leaders?

A “historic” victory by the Saudi national team over their Argentine counterparts at the World Cup competitions in Qatar 2022 put the Houthi militia in a “dilemma” and exposed their double standards.

No sooner had referees from the Saudi and Argentina national teams blown the final whistle with the victory of the “Green Falcons” over the “Tango Dancers” on the Yemeni street, whose citizens went out to celebrate what they described as a “historic achievement”.

However, this Arab “victory” put the Houthi militia and their leadership in a serious dilemma, so which side do you lean towards? … Arab identity or loyalty to Tehran? … These questions revealed “great” contradictions within the ranks of the “revolutionaries.” 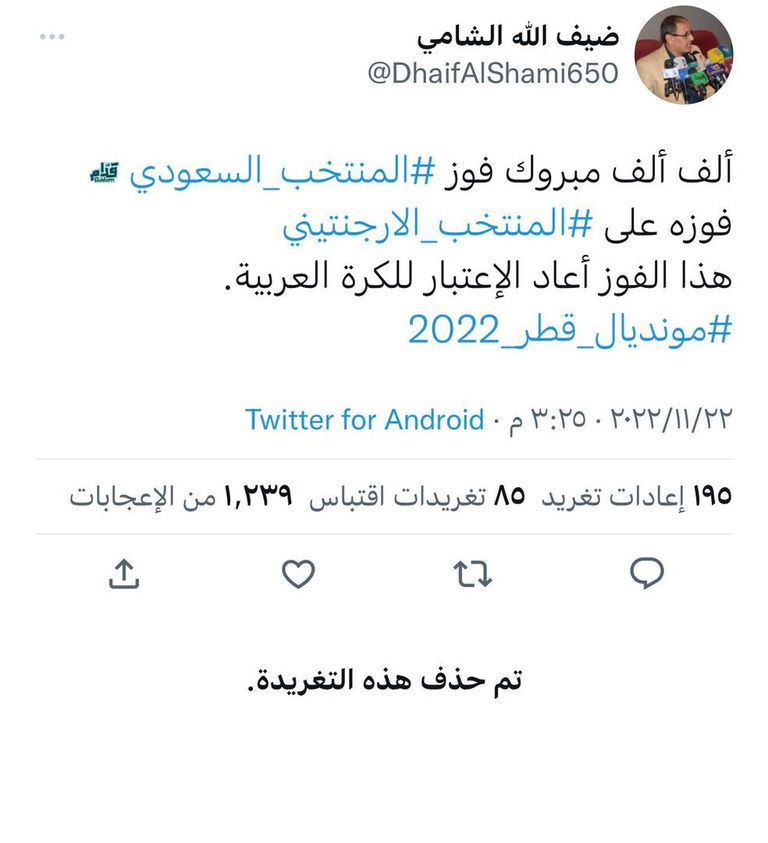 While the quick, unartificial reaction of some militia leaders came on their social media accounts, congratulating Suqur Al-Akhdar on her victory, which was described as “deserved,” they quickly deleted those tweets, in a position that activists are considering “Iranian directives” were drawn as a means of ridicule due to loyalty to Houthi absolute leaders of Tehran.

One of the most prominent Houthi leaders to tweet and then delete was the head of the so-called “Foreign Ministry” Hussein Al-Ezzi, extremist leader Daif Allah Al-Shami appointed Minister of Information and Abdul Qadir Al-Murtada the appointed leader to head the Prisoners Committee , alongside activists loyal to the militia. 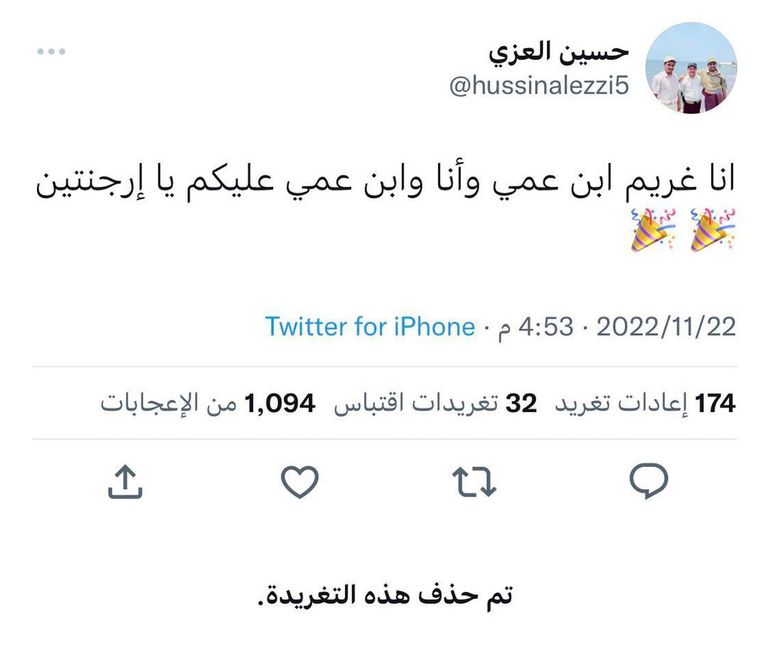 He went beyond deleting the Houthi militia leaders to apologize in their tweets, claiming they were “spontaneously” in a position that bared their “hatred” to any Arab delight, and revealed their internal conflict as one Result of absolute loyalty to the Iranian regime and its interference in the smallest details of the militias.

This position, which revealed the double standards of the Houthi militia and their absolute subordination to Tehran, was reflected – also – in the advance congratulations I gave to the Iranian national team for their victory over their English counterparts by those “revolutionary” elements last year Monday.

However, after their understanding of the reality of the game faltered and their hopes of the Iran national team’s “disappointing” result being dashed by their English counterpart, in addition to the Iran national team’s reluctance to sing the anthem, they rushed to deliver the congratulations from their accounts on the social networks “Facebook” and “Twitter”. “.

It was not just the leaders of the Houthi militia who fell into this “dilemma”; Also, the telecom company (Yemen Mobile), the largest telecom company in Yemen and under the control of the revolutionaries, tweeted on its Facebook account ahead of the England-Iran game, supporting the Tehran team and calling its players “lions”. Knight.”

However, according to their description, after the “lions” failed to sing the anthem in support of the anti-mullahs protests in Iran, they forced the giant company to delete its publication, only to reveal that the impasse was breaking away from the According to observers, the Houthi base extends into the hierarchy of its leaders.

Observers believe the Houthi militia’s retreat from blessing Saudi Arabia’s victory and previous congratulations to the Iran national team was an embodiment of their state of weakness and highlighted the level of public shock and confusion the militia leaders have faced after they were stripped “Iranian chess pieces” have become. ”

Furthermore, political activist of the General People’s Congress Party, Rashad Al-Soufi, said in an interview with Al-Ain News that “the withdrawal of the leaders of the Houthi militia to spread the blessings of the Saudi national team’s victory confirms that they” don’t even have the freedom to express their feelings about a sporting event.

He added: “The state of weakness of the Houthi militia leaders, which justifies their posting of congratulations on the Saudi national team’s victory on social media platforms, undermines their claims to sovereignty and the independence of decision-making.”

Although the Houthi leaders tried to show that what they wrote about the Saudi national team’s victory was an emotional or spontaneous case against an Arab people, the Iranian veto was “strict” and directed the militias to delete the tweets and apologizing for publishing them too, according to the Yemeni political activist.