“Manama Dialogue” .. the summit of security and political initiatives

It is the “Manama Dialogue” forum that is starting its 18th session this Friday with the participation of more than 20 foreign and defense ministers from all over the world.

The forum is one of the most important global diplomatic and security summits, which contributes significantly to strengthening security and stability in the Middle East region, and also carries important international aspects.

This year’s forum, which will last 3 days, will launch under the title “Rules and Competition in the Middle East” with the participation of dozens of officials, policy makers, economists, politicians and strategic thinkers from around the world.

During the three days, participants will share key political, security and economic challenges and discuss ways to address them in order to improve security and stability in the region and the world.

This annual global conference, organized by the International Institute for Strategic Studies in cooperation with the Bahrain Ministry of Foreign Affairs, highlights Bahrain’s central role as an active partner in strengthening peace and security in the region and the world.

The Manama Dialogue, which Bahrain has organized annually since 2014, is considered the first security summit in the Middle East as it brings together officials, ministers, and military and security leaders, providing a platform for bilateral and multilateral meetings aimed at advancing political initiatives.

Bahrain’s King Hamad bin Isa Al Khalifa reiterated in previous statements that his country greatly appreciates the role of the Manama Dialogue Conference as the premier regional forum for exchanging views and visions to protect and enhance regional security.

On Friday evening, EU Commission President Ursula von der Leyen is to give the keynote speech at the “Manama Dialogue”.

The second day of the conference (Saturday) will consist of 4 plenary sessions, the first entitled “US Security Partnerships in the Middle East” and the second entitled “Developments in Energy Geopolitics”. Energy security is discussed as one of the most prominent consequences of the Russo-Ukrainian war.

This session will discuss the proposed solutions to solve the problems and crises in the region, especially the Palestinian issue, and the situation in a number of countries in the region such as Yemen, Syria and Iran.

The Manama Dialogue concludes on Sunday with two sessions, the first entitled “Security of Global Maritime Chokepoints” and the second entitled “New Security Partnerships in The Middle East”.

Ahead of the forum, some of his guests held talks with officials in Bahrain on Thursday.

Prince Salman bin Hamad Al Khalifa reiterated that relations between the Kingdom of Bahrain and European Union countries are receiving attention for their development towards a broader horizon of cooperation and joint coordination in various fields.

He noted the importance of redoubling efforts at the international level to ensure access to desired development paths by strengthening frameworks for cooperation, peace and partnership aimed at promoting common interests for all reach.

He noted the level of existing relations between the Kingdom of Bahrain and European Union countries and their mutual eagerness to build on what has been achieved in order to strengthen partnerships to achieve desired goals.

During the meeting, in addition to discussing the latest developments at regional and international level, issues of common interest were discussed. 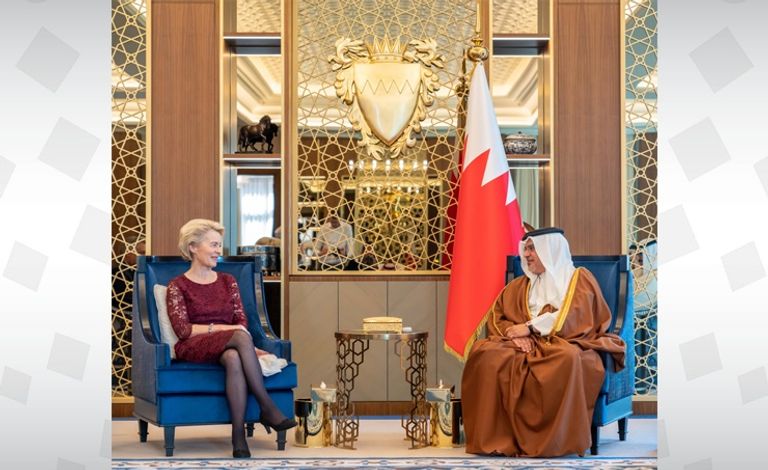 During the meeting, they reviewed the historic friendship and strategic partnership between the Kingdom of Bahrain and the friendly United States of America, and discussed ways to improve bilateral cooperation in various fields to achieve the two countries’ common goals and aspirations and meet the Interests of the countries of the region, in addition to discussing a range of issues and issues of common concern in both arenas, regional and international.

In addition to the President of the European Commission and the US Deputy Secretary of State for Middle East Affairs, Dr. Fuad Muhammad Hussein, Deputy Prime Minister and Foreign Minister of the Republic of Iraq, Dr. Fouad Muhammad Hussein, Minister of Foreign Affairs of Yemen and Minister of Foreign Affairs of Yemen, Zaki Muhammad, arrived in Bahrain yesterday Thursday to attend the dialogue in Manama.Ministry of Defense of the Republic of Singapore.