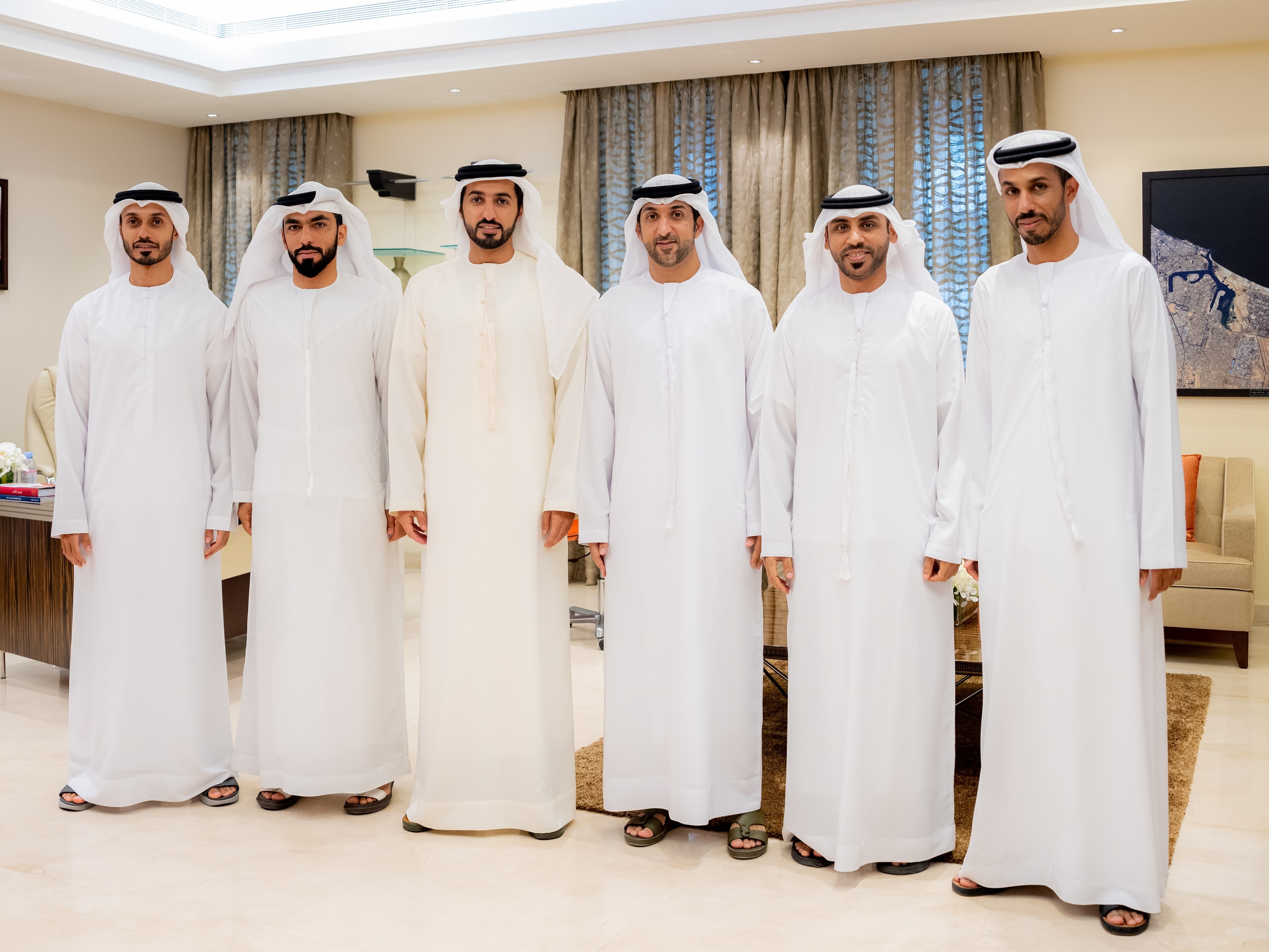 DUBAI, Nov 8 / WAM/ Emirates Football Association President Sheikh Rashid bin Humaid Al Nuaimi met with the Emirates International Arbitration Team, consisting of Mohammed Abdullah Hassan, Mohammed Ahmed Youssef and Hassan Al-Mahri, ahead of their trip to Dubai today the Qatari capital, Doha, to take part in the management of the 2022 World Cup matches that will be held in Doha.It will begin on November 20 in the presence of Salem Ali Al Shamsi, member of the Board of Directors of the Football Association, and Mohammed Abdullah Hazam Al Dhaheri, Secretary General of the Federation.
Hailing the efforts of the stadium judges and their constant zeal to hone their talents and record an outstanding presence for the Emirates whistle both on the continent and internationally, Sheikh Rashid bin Humaid Al Nuaimi, as well as their success on the ground, stressed the continued participation of the Emirates Arbitrator administering World Cup matches is a testament to the strength and stability of Emirati arbitration and its solid international reputation. Hoping to be able to participate in more than one refereeing team at the 2026 World Cup.
He said: “The Football Association fully supports arbitration because the success of football competitions depends primarily on the referee, his performance and his decisions.” He stressed that the Emirati referee has become a permanent ambassador of Emirati football in the World Cup , and that this is a testament to the great effort he puts in in the internal camps and external drills, daily drills and workshops.

Urging the football referees attending the Qatar 2022 World Cup to focus, Sheikh Rashid bin Humaid Al Nuaimi reiterated his confidence in their ability to excel at the World Cup.
He added: “We have confidence in the Emirati arbitrator who has achieved outstanding success in the world of arbitration both locally and internationally and we will remain his support and provide him with the best environment to work and prepare.”

For his part, Salem Ali Al Shamsi, Executive Board Member of the Football Association and Chairman of the Referees Committee, said that the reception by Sheikh Rashid bin Humaid Al Nuaimi, President of the Association, for the referee team taking part in the administration of the 2022 World Cup matches is a testament to that continued board interest in stadium judges.

He added: “Sheikh Rashid bin Humaid Al Nuaimi’s support for an arbitration is positive for the work and his welcoming of the arbitration staff ahead of their trip to Qatar gives them a great morale boost at this global football gathering.”
Al Shamsi reiterated his gratitude to the federation’s President for his follow-up to the arbitration programs and his continued support of the stadium judges.
International referee Mohammed Abdullah Hassan expressed his gratitude and appreciation to Sheikh Rashid bin Humaid Al Nuaimi for welcoming the World Cup team and stressed that the federation’s president is keen to support football referees and follow their affairs . and that this is not new to him.
For his part, Mohammed Ahmed Youssef said: “The reception of Sheikh Rashid bin Humaid Al Nuaimi is a true translation of his trust in referees and belief in their vital role in football competitions and we appreciate his support, encouragement and zeal in following the work of the stadium judges and provide everything that will help them to succeed.”
For his part, Hassan Al-Mahri expressed his thanks and appreciation for the federation’s president’s welcome before he traveled to Doha to attend football’s biggest competitions, and praised the federation’s board of directors’ interest in arbitration and its elements.