Emirates News Agency – Mohammed bin Rashid: Tourism is an important part of diversifying our national economy. . Our goal is for the tourism sector to contribute 450 billion dirhams to our GDP by 2031 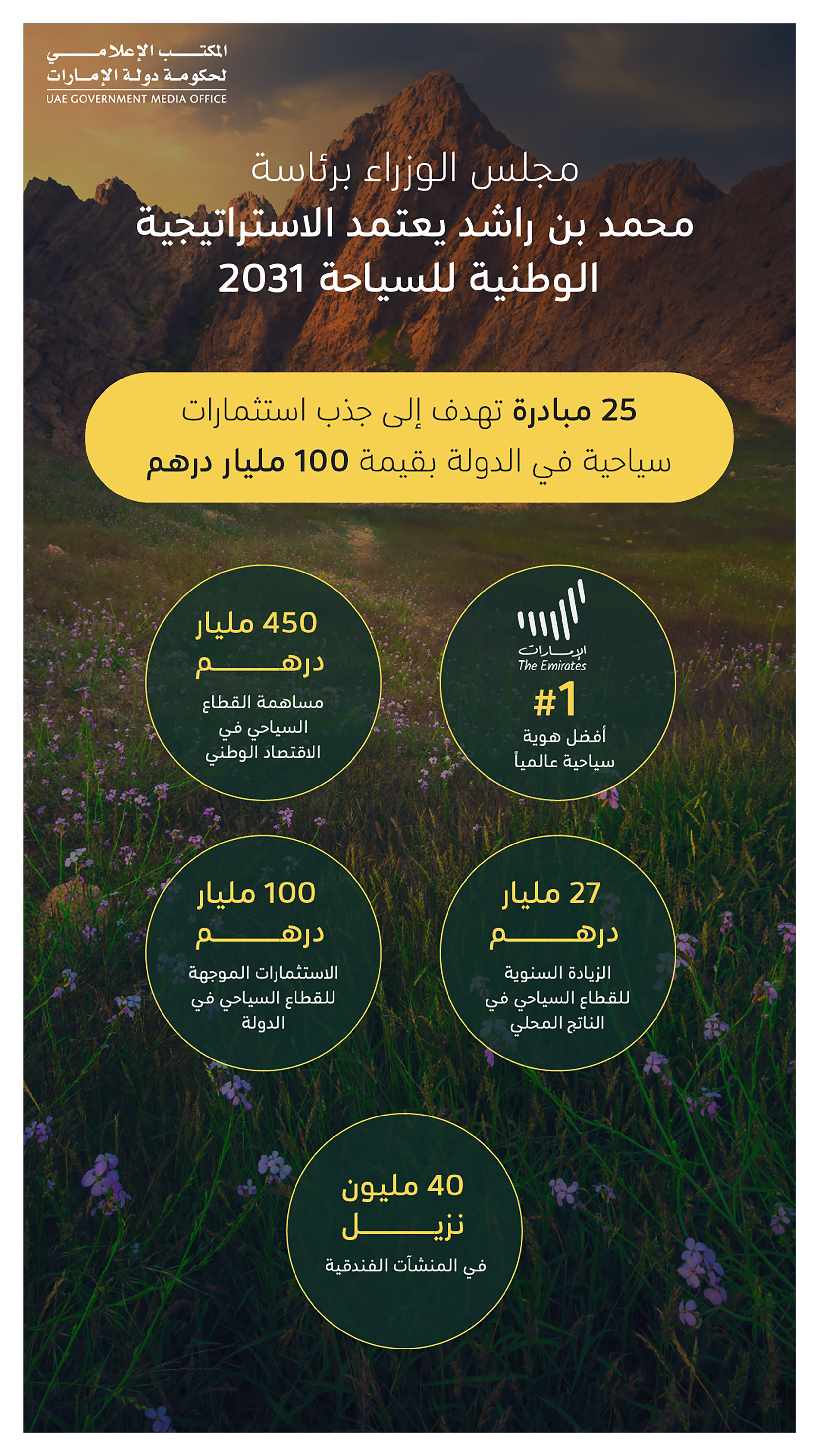 The UAE government launches the “National Tourism Strategy 2031”.
It includes 25 initiatives and aims to attract tourism investment worth 100 billion dirhams in the country.

Mohammed bin Rashid: Today we adopted our national tourism strategy up to the year 2031. Today we are among the top ten tourist destinations in the world and our goal is to accelerate our competitiveness by attracting 100 billion dirhams as additional tourism investments for this vital sector and reaching 40 million hotel guests in 2031.

Mohammed bin Rashid: Tourism is an important part of diversifying our economy and an important contributor to consolidating our global competitiveness. Our airports handled 22 million passengers in the first quarter of this year alone, and our goal is for the tourism sector to contribute 450 billion dirhams of our GDP in 2031.
The goals of the strategy up to 2031:
Increase the contribution of the tourism sector to the national economy to 450 billion dirhams, at an annual rate of increase of 27 billion dirhams.
• Attracted 40 million guests in hotel establishments.
• Elevating the UAE’s position to become the first in the world as the best tourism identity.
• 4 main directions of the strategy, including: strengthening national tourism identity, increasing tourism investment, capacity building and development of specialized tourism products.

ABU DHABI, Nov. 11/WAM/ His Highness Sheikh Mohammed bin Rashid Al Maktoum, Vice President and Prime Minister of the United Arab Emirates and Ruler of Dubai, has launched the National Tourism Strategy 2031, which is included among the 50 projects as one of the top targets in the coming years and aims to improve the country’s status as the best A-tourist identity around the world and consolidate its position as a leading tourist destination based on tourism diversity, utilizing the unique features and characteristics of the seven emirates become of the country.
His Highness Sheikh Mohammed bin Rashid Al Maktoum said: “Today we approved our National Tourism Strategy up to the year 2031. Today we are among the top ten tourist destinations in the world and our goal is to accelerate our competitiveness by attracting 100 billion dirhams as additional tourism investment in this vital sector and reaching 40 million guests. My hotel in 2031”.

His Highness added: “Tourism is an important part of diversifying our national economy and an important contributor to strengthening our global competitiveness. Our airports received 22 million passengers in the first quarter of this year alone, and our goal is for the tourism sector to contribute 450 billion dirhams to our GDP in 2031.”

The National Tourism Strategy, which is being formed in partnership with various federal and local tourism boards and agencies, national airlines and a number of international institutions and international companies, aims to strengthen the unified national tourism identity and support the integrated and established tourism that the United United Arab Emirates to offer a unique experience to visitors from all over the world. The world is built on the diversity of tourism.
The strategy, through collaboration and coordination with a group of strategic partners from the public and private sectors, will implement its objectives over the coming years, including increasing the tourism sector’s contribution to the GDP of the national economy to 450 billion dirhams annually, increasing at a rate of 27 billion dirhams new investments worth 100 billion dirhams for the country’s tourism sector and attracting 40 million guests in hotel facilities.
The strategy includes the implementation of 25 initiatives and policies to support the development of the tourism sector in the country, based on 4 main directions, namely, strengthening the national tourism identity, developing and diversifying specialized tourism products, building tourism skills, promoting the entry of national cadres into the tourism sector and increased investment in various tourism sectors to enhance the state’s efforts to provide an attractive and safe national tourism environment, pioneering and integrated tourism services, diverse and unique tourist destinations, and developed infrastructure for the tourism sector.
The strategy aims to help increase the tourism sector’s contribution to the national economy’s GDP in the coming years, strengthen the country’s tourism identity and promote tourism markets, and promote tourism investment in travel, aviation and hospitality, creating new investment opportunities and attract more international companies to the country’s markets, encourage national cadres to enter and participate in various tourism sectors, and develop tourism data and statistics.
Thanks to the forward-looking vision of the wise leadership, the UAE has been able to make great strides in the development of the tourism sector as it will make a major contribution to the sustainable economic diversification of the national economy over the next fifty years in Travel, Aviation and Hotel.

The new strategy ushers in a new phase in the development and sustainable process of Emirati tourism in line with international best practices through the launch of the National Tourism Strategy 2031, which will help cement the country’s leadership position in global travel and tourism Map, in light of the goals and projects of the fifty.
The National Tourism Strategy 2031 is being developed through collaboration and coordination between the Department of Economy and various local and federal agencies and institutions involved in the tourism sector, including the Department of Foreign Affairs and International Cooperation, the Federal Agency for Identity and Citizenship, Customs and Port Security, the Central Bank of the United Arab Emirates, the General Civil Aviation Authority, Emirates Airlines and the Organization Global Tourism, a number of international companies and the Federal Center for Competitiveness and Statistics.
The UAE has managed to strengthen its position on the global tourism map and become one of the top global tourism destinations after ranked in the top ten in a number of global competitive indicators related to the tourism, travel and hotel sectors in 2021 belonged worldwide to reflect the increasing confidence in the national tourism sector and the leading reputation that the tourism environment has achieved in the country, be it at the level of domestic tourism or among international tourists and visitors.